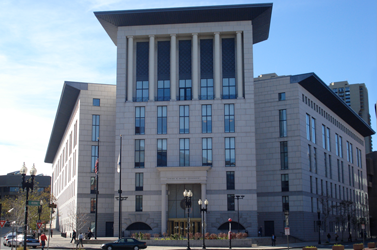 I probably have little business starting a blog dedicated to following the Boston Housing Court.  My experience there has been limited so far to serving as Attorney of the Day a few times through the Boston Bar's Volunteer Lawyers Project.  In just the few times I've been there I've had the chance to meet people with far more familiarity with the court who would make better chroniclers of its goings on than I.  Nevertheless, one angle I hope to bring to this reporting is exactly that of a young attorney's impressions as he learns how this institutions works.

For the now the plan is to post mainly about my experiences on a weekly basis at the VLP's Attorney of the Day table, but I'll also comment on recent case developments that concern the Housing Court, as well as broader political developments of similar relevance.

A little about myself though: I graduated from Northeastern University School of Law in 2003 and passed the MA bar in the same year.  Jobs were starting to thin then (though they were by no means as difficult to come by as they currently seem to be) and I didn't have much understanding about the practice of law, aside from the paltry exposure one gets in law school and as the result of summer internships, clerkships, etc.  Read: my expectations for what kind of work/salary I could expect to find were seriously out of whack with any kind of economic and social realities.   I consequently worked for three years as a contract attorney at various firms in Boston soon after graduating and while having the income was nice at the time, it didn't take long to get screamingly bored of the endless electronic doc reviews. The result was a decision to return to grad school to study for a Ph.D. in philosophy at BU.  Fortunately or unfortunately, after 5 years not much came of this except an economically useless master's degree (about which I am nevertheless happy), but this is a story for another blog.

The question then was what one does with relatively little legal experience and a huge gap in their resume after jettisoning grad school.  I had done some VLP work briefly prior to returning to grad school so got back in touch with them and signed up for one of the training sessions on Landlord/Tenant law.  I thought about just grabbing one of the cases they send around in their emails but noticed the Attorney of the Day program at the BHC and decided to check it out.  It also occurred to me to try the solo route which led to the creation of my own law office.

That's basically where I am now and hopefully motivates a little bit my reasons for focusing a blog on this particular institutions.  I should add that the 4-5 times I've gone to participate the outcome has consistently been beneficial, rewarding and educational.  One meets a lot of other attorneys at various stages of their career and would have to be a stone wall not to pick up good info on the court or practice different skills.  The real challenge for anyone that shows up for AOD who doesn't already have familiarity with the housing court is reigning in the zeal when first faced with a client issue.  The next post will focus on what anyone could expect who volunteers for the AOD for the first time.